There are certain times of year, primarily November to March, when the subject of pest control starts to assume increasing importance in the minds of home owners. This is the time when you begin to notice that you are competing for your space with a growing population of undesirable creatures, including termites, spiders, rats and cockroaches. It wouldn’t be so bad if these uninvited visitors stayed outside, but encountering them inside puts a much greater strain on your hospitality.

When these encounters do occur, it can be tempting to do nothing and hope the intruders will go away, as dealing with them can be less than pleasant. However, doing nothing is really not an option. Some pests, notably rats and cockroaches, can carry dangerous diseases, while others, especially termites, can cause structural damage, which will probably not be covered by insurance. It is important to call in pest control services sooner rather than later.

One reason you may be hesitant about bringing in a pest control service is that you may be concerned about the chemicals they use, especially if you have children or pets. It is true that in the past, chemical pesticides were the primary recourse of pest control services. However, nowadays they are more likely to adopt a more all-round approach, usually termed integrated pest management.

Integrated pest management involves dealing with an infestation problem by attacking it from a number of different angles, including building up a greater understanding of the various species and why they invade our premises. This includes analysing the biology, life cycle and habits of different species, including the seasons and climatic conditions in which they flourish. It also involves looking at the conditions which make your home inviting for a particular species, including ease of entry, availability of food, and levels of warmth, humidity and ventilation.

Once the information has been gathered, the treatment process involves two main strategies, both equally important: these are chemical control, and natural pest management. The natural pest control aspect covers a wide range of simple measures, most of which can actually be carried out by the homeowner. Initially, the company will conduct a pest inspection of your home, and advise you on the points where it is vulnerable to invasion, and what you can do to make it secure.

The most important measures involve dealing with food sources, including clearing up all rubbish, keeping rubbish bins securely covered, ensuring all food is put away in airtight containers, and keeping all floors and work tops absolutely clean and free of crumbs. They might also include repairing and sealing off any holes or cracks that allow access to the house, and fixing leaking pipes both outside and inside. It can be a good idea too to install some physical barriers, such as fly screens, or metal caps to protect against termites. The best way to control termites is via a professionally installed termite barrier; here’s a good source of information;

Prevention is always better than cure, but if there is already an infestation, some chemical pest control is also required. Nowadays, however, pesticides are much less toxic than they used to be, and are safer for humans and pets, as well as being less damaging to the environment. The most common are pyrethroid powders and sprays, which are odorless and have long-lasting effects. Also widely used are organophosphorus products, which work by interfering with insects’ nervous systems, and insect growth regulators, which help to prevent reproduction, especially in cockroaches and termites. The specific product used will depend on the biology of the particular species being targeted. 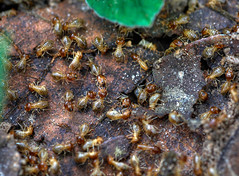 If you think you have an infestation problem, or wish to prevent one, you no longer need to worry about being exposed to harmful chemical products when you call a pest control company. Nowadays these services have many more resources at their disposal, and almost certainly most, or possibly even all, of your problem will be solved without any chemicals being used at all. And you can be sure of one thing — that any chemicals that do get used will be a lot less toxic than the pests that are being exterminated.

If you live in South East Queensland, and the Gold Coast in particular, you have a choice of over 300 pest control companies. To make your choice a bit easier I’m going to recommend someone for you;

The Pest Company is run by Luke Taylor They are a premier Gold Coast pest control company you can rely on. If there’s anything you want to know about Gold Coast termites, Luke is a font of knowledge on the subject.

This site uses Akismet to reduce spam. Learn how your comment data is processed.